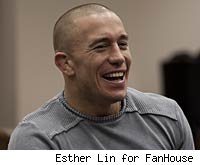 It's safe to say that, prior to becoming one of the best fighters in the world, Georges St-Pierre emerged from humble beginnings. The current UFC welterweight champion, who will defend his title against Dan Hardy at UFC 111 in March, recently spoke to the media about some of the not so memorable jobs he had to do while working his way up the MMA ladder. Surprisingly, though, GSP categorized his five-month stint as a garbageman as "not so bad."

Watch below as the 28-year-old discusses his own version of dirty jobs.