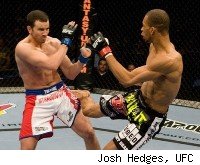 It was Hill's first fight in 13 months. In Dec. 2008, the former collegiate wrestler suffered one of the most gruesome injuries in MMA history, when he fractured the tibia and fibula in his right leg while throwing a kick. His shin snapped into a V-shape and he fell to the mat as the fight was promptly stopped.

Afterward, Hill was told by doctors that his fighting career was likely over.

The 6-foot-4, 155-pounder first came to national attention on season five of The Ultimate Fighter, where his size made him stand out among the cast. After losing in the quarterfinals to eventual season champion Nate Diaz, Hill debuted in the UFC by defeating Joe Veres in Jan. 2008. At UFC 86 a few months later, he was submitted by Justin Buchholz before suffering the injury in a bout against Dale Hartt.