Marloes Coenen Wants to Show That Women Can Fight 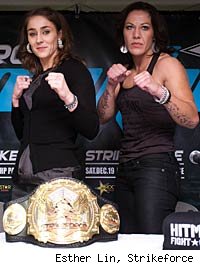 Marloes Coenen describes herself as "just an ordinary girl from the Netherlands," and she's still trying to wrap her head around the fact that in six days, hundreds of thousands of Americans will tune into Showtime to watch her fight Cris Cyborg. But even though she isn't accustomed to the idea that she's a role model, she says her biggest goal as a fighter is to inspire other women to follow in her footsteps.

Coenen said she took up martial arts not because she ever thought she would do it professionally, but because she feared being alone on the street and wanted to be able to defend herself.

"I'm from a very small town in the East of the Netherlands, and I had to ride my bike a long way to school, and all my friends went to a different school," Coenen said. "That meant I was by myself for a long time every day, and I wanted to learn how to defend myself, because I was concerned about that. So I took martial arts classes and I found a Brazilian jiu jitsu trainer, and he also started to show me MMA, and he told me I should fight."

Now Coenen is preparing for a Jan. 30 fight that will be the biggest of her career, and one of the biggest in the history of women's MMA. Cyborg is coming off a first-round TKO win over Gina Carano, and Coenen describes Cyborg as the strongest opponent she's ever faced.

"Her strength, of course, is her physique," Coenen said. "She's a real powerhouse. She's really good at throwing combinations -- she doesn't just throw one kick and one punch. She tries to walk right through you. I see some weaknesses, but I'm going to keep those to myself until the 30th."

To prepare for Cyborg, Coenen is sparring almost exclusively with men -- both because she wants sparring partners who can replicate Cyborg's power, and becausewhere Coenen trains in the Netherlands, it's hard to find women who understand the sport.

"Most of my sparring partners are guys," Coenen said. "There aren't a lot of women in my gym. MMA hasn't been as big in the Netherlands -- people who are into martial arts are more into Thai boxing. But now with people like Gegard Mousasi and Alistair Overeem and Melvin Manhoef, we're seeing more boys in the Netherlands getting into MMA. I'm hoping it happens with the girls now."

Coenen has a 17-3 professional record, including 12 wins by submission, and she showed off her ground skills in her most recent fight, a first-round submission victory over Roxanne Modafferi at Strikeforce's November event.

The win over Modafferi was Coenen's first fight in the United States, and she said she was pleasantly surprised that American fans appreciated a good submission, noting that in the Netherlands, where kickboxing is more popular than MMA, fans don't have much use for fights that go to the ground. She said she's excited at the prospect of reaching a larger audience in the United States.

"I'm here in the Netherlands and I don't know if American MMA fans know who I am, although I do notice a lot of people want to be friends with me on Facebook now," Coenen said. "But the truth is I try not to pay attention to that, I don't read things about myself on the Internet, because it could be very distracting. I only want to focus on my fight."

Coenen credited her team, Golden Glory, for inspiring her to make her living as a fighter. And she said she hopes she can be an inspiration to others.

"I'm just an ordinary girl who was doing martial arts on the side, and the next thing I knew I was getting professional fights in Japan," Coenen said. "So much has happened for this sport in nine years. Back then I couldn't find fights and I worried that I wouldn't be able to fulfill my MMA career and that I'd live to regret it. It felt to me like the only option I had. I knew I could get a career at a company or something but I didn't want to do that. Now that I'm seeing the way this sport influences women I want as many women as possible to get into MMA -- not to be a professional fighter, you don't have to fight at all, but just to better yourself."