Heading Into Demian Maia Fight, Dan Miller Feels He Has Something to Prove 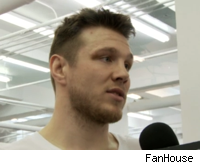 UFC middleweight fighter Dan Miller says that when he faces Demian Maia at UFC 109 on Feb. 6, he will look to control the pace of the fight from start to finish. That's something he didn't do against Chael Sonnen at UFC 98, which led to his first loss inside the Octagon as well as his first in 10 fights. Maia is also coming off the first professional loss of his MMA career: a devastating 21-second loss to Nate Marquardt at UFC 102.

MMA Fighting recently spoke to the 28-year-old Miller about recently receiving his Brazilian Jiu Jitsu black belt, why he still feels he has something to prove to the UFC and his place in the crowded middleweight division. Check out the video interview below.