Jon Fitch: If I Stop Thiago Alves, I'm Next for GSP 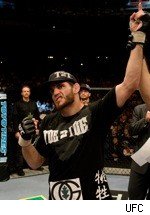 Jon Fitch will face Thiago Alves at UFC 111 in a bout that Fitch thinks gives him a clear opportunity to earn a shot at welterweight champion Georges St. Pierre.

"If I stop him, I don't see how they could deny me a shot at GSP," Fitch said on HDNet's Inside MMA. "At that point I would have stopped someone twice that GSP couldn't finish in five rounds, so I think that's a very strong argument for me to get a title shot."

On merit, Fitch has a very good argument: If he beats Alves he's indisputably the No. 2 welterweight in the world, and if he stops Alves, it'll be his second time doing so. Fitch previoulsy beat Alves by second-round TKO in 2006. When you're the No. 2 guy in the world and you've stopped the No. 3 guy twice, you've got a good case that you deserve a fight with the No. 1 guy.

But there are a couple of other issues. For starters, Fitch is just assuming that St. Pierre will still be the UFC welterweight champion. Dan Hardy will have something to say about that in the main event at UFC 111.

And the more significant issue is that Fitch already had his shot at St. Pierre, and he was thoroughly dominated. The UFC wants to put St. Pierre in the Octagon with someone it can sell as a legitimate threat, and after the way St. Pierre whipped Fitch, that'll be a tough sales job. If Paul Daley beats Josh Koscheck at UFC 113, I think Daley would get the next crack at St. Pierre's welterweight title, because Daley has a fighting style that makes him an easier sell as a threat to the champ.

Still, Fitch sees his fight with Alves as a fight for a title shot.

"We're both fighting for another crack at GSP, so we both have something big that we want," Fitch said.

And Fitch added that he thinks both he and Alves are better fighters now than they were in 2006.

"Mentally he's matured a great deal in that time period," Fitch said. "He was pretty young when we fought. ... His wrestling defense is much better and he's harder to take down. He's stronger and I think he's matured physically. Maybe he's a little bit slower. We'll see. ... I'm a much better athlete than I was a couple years ago. I'm a much improved fighter from when I first fought, and so is he."