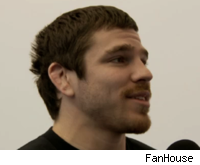 After winning 5 of his first 6 UFC fights, Jim Miller says he is ready to fight the top 155-pounders in the world. His climb up the lightweight ladder continues, as less than a month after he defeated Duane "Bang" Ludwig at UFC 108, Miller is getting ready to face Mark Bocek at UFC 111 in Newark, N.J. The fight will serve as a homecoming of sorts for Miller, who lives approximately an hour away from the Prudential Center in Newark.

MMA Fighting spoke to the 26-year-old recently about his evolution as an MMA fighter, his recent victory over Ludwig and his preparation for Bocek. Check out the video interview below.