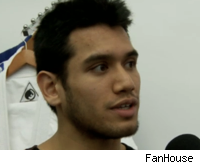 When Dana White called Phillipe Nover "the next Georges St-Pierre" prior to the eighth season of The Ultimate Fighter, the MMA community's expectations for the Brooklyn-born fighter immediately skyrocketed. Unfortunately for Nover, things have gone downhill for him since: he lost the TUF 8 finale to Efrain Escudero and then lost via controversial stoppage to Kyle Bradley at UFC 98. Then, prior to his UFN 19 fight against Sam Stout, Nover fainted backstage and was rushed to the hospital. The health scare forced him out of the bout and left many questioning whether he would ever fight again.

MMA Fighting recently spoke to 25-year-old, who also happens to be a registered nurse, about what happened prior to the Stout fight, how he's currently feeling and dealing with those same high expectations heading into his UFC 109 fight against Rob Emerson. The video interview is below.