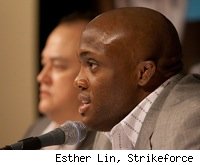 The long saga of finding Bobby Lashley an opponent for next week's Strikeforce: Miami show has officially ended.

Strikeforce ran into several road blocks in securing an opponent for Lashley, who is 4-0 since making his MMA debut in December 2008. The former WWE champion also currently works for TNA wrestling.

This marks the second time in Lashley's short career that he will be facing an opponent on less than two weeks notice. He defeated Jason Guida last march after Ken Shamrock was suspended for steroid use. The 33-year-old American Top Team member also holds victories over Mike Cook and Bob Sapp.

Sims was recently a cast member on the tenth season of The Ultimate Fighter, but was bounced from the competition in the first round when he lost to Justin Wren via submission. The veteran's most notable fights include two straight losses to Frank Mir and another to Tim Sylvia. He is officially riding a three-fight winning streak heading into this fight because his loss on TUF doesn't count on his record. This fight will mark his Strikeforce debut.

With this most recent fight announcement, the Strikeforce: Miami card is officially set. The event airs live on Showtime from Sunrise, Fla., next Saturday night.

Below is a look at the entire card: