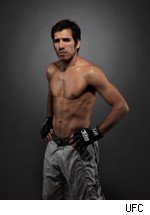 The UFC debut of former Pride lightweight champion Takanori Gomi is tentatively scheduled for UFC Fight Night 21 on March 31 in North Carolina, with Kenny Florian penciled in as Gomi's opponent.

ESPN's MMA Live, on which Florian is an analyst, reported the fight Thursday.

If Gomi wins, he would likely get the next shot at the UFC lightweight championship, which will be contested between B.J. Penn and Frank Edgar in April. Gomi was the Pride champion when the UFC purchased Pride, and the UFC said at the time that it wanted to unify the UFC and Pride belts. That didn't quite go as planned, and there really is no linear Pride lightweight champion anymore (you could argue that the linear Pride lightweight title belongs to Tatsuya Kawajiri), but in any event, the UFC would love to promote a Gomi-Penn rematch.

However, Florian would have to be considered a significant favorite to beat Gomi, who hasn't looked like the Fireball Kid of the Pride days in several years. Florian vs. Gomi will be an interesting fight, but it will probably be a fight that demonstrates how far Gomi has fallen from the days when he was the second-best lightweight in the world.