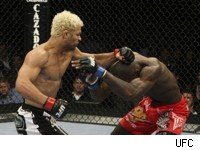 The last time the UFC went head-to-head on pay-per-view with Floyd Mayweather Jr., Mayweather won by knockout. Not literally -- he beat Juan Manuel Marquez by unanimous decision -- but Mayweather attraced about 1 million pay-per-view buys on September 19, easily topping UFC 103 on the same night, which is believed to have done somewhere between 300,000 and 400,000 buys.

And so the UFC has decided not to go head-to-head with Mayweather again, moving the tentatively scheduled UFC 113 from May 1 to May 8 after Mayweather and Shane Mosley agreed to fight on May 1.

"We were trying to not go the same night as boxing but these [expletive] guys can't get out of their own way," White told Steve Cofield of Cagewriter. "I have never seen anything so unorganized, selfish and dysfunctional as boxing. It's a joke!"

Meanwhile, although I previously wrote that UFC 113 tentatively looks awesome, it's starting to look somewhat less awesome. Josh Koscheck says his fight with Paul Daley will be the co-main event, with the light heavyweight title fight between Lyoto Machida and Shogun Rua serving as the main event. That means Rashad Evans vs. Rampage Jackson won't be on UFC 113, and has probably been pushed back to UFC 114, where it would serve as the main event of the traditional Memorial Day Weekend show.