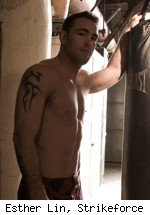 Shields leaves Friday for Las Vegas to begin taping the eleventh season for the next two months. The show, featuring all middleweights, premieres March 31 on Spike TV.

According to his bio on his official website, Shields has wrestled since the age of nine and was a two-time All American wrestler in Cuesta College. In 2007, Shields received his Brazilian jiu-jitsu black belt under Cesar Gracie.

Shields, MMA Fighting's No. 5 middleweight, is currently riding a 13-fight win streak and is coming off a win on CBS against Jason "Mayhem" Miller to capture the Strikeforce middleweight strap. A title defense against Dan Henderson in April is on the horizon, but not officially confirmed.