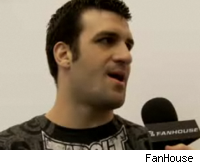 Rolles Gracie Jr. is set to make his Octagon debut at UFC 109 on Feb. 6 against Mostapha Al Turk. And while he won't be the first Gracie to ever compete for the organization, he will certainly be the largest. Standing 6-foot-4 and weighing approximately 245 pounds, "Gracie 2.0," as he has been recently dubbed, has major expectations to live up to.

MMA Fighting recently spoke to Renzo Gracie's cousin about living up to those expectations, getting ready for his UFC debut and his love of Twitter. Check out the video interview below.