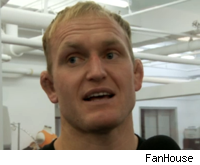 Prior to landing in WEC, Deividas Taurosevicius' bounced around many different organizations. The 32-year-old was relatively successful, but never made a major impact anywhere. However, since making his WEC debut in October, he's picked up impressive wins over top contenders Javier Vasquez and Mackens Semerzier, and MMA Junkie is reporting that next in line for the Lithuanian-born fighter is L.C. Davis.

MMA Fighting recently spoke to Taurosevicius (12-3) at Renzo Gracie's BJJ Academy in New York City about his rapid climb up the WEC 145-pound ladder, his next fight and the decision to leave his first love, rugby, for MMA. Check out the video interview below.