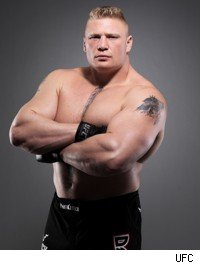 Brock Lesnar's health condition went from what was believed to be a common viral virus into something possibly career threatening, and then fortunately, encountered a "miracle" recovery.

Let's take a look at the timeline of events that has occurred the past three months.

The UFC announces that Lesnar will defend his belt against Shane Carwin at UFC 106 on Nov. 21 in Las Vegas.

"I'm excited to get back in the Octagon on November 21st to defend my title," Lesnar said. "I'm looking forward to fighting Shane Carwin. He's undefeated and I'm the man who is going to put an end to that."

The fight was announced alongside Tito Ortiz vs. Mark Coleman. Coleman would also pull out of the card, part of the bizarre streak of injuries/heath issues the next few months for the UFC.

Lesnar withdraws from the fight due to a mysterious illness. According to a report on Yahoo! Sports, Lesnar was unable to train for over three-and-a-half weeks.

"He said he's never been this sick in his life," UFC president Dana White told Yahoo! Sports. "He said it's been going on for a long time and he just hasn't been able to shake it."

On the same day, a video on YouTube is uploaded of Lesnar's seemingly healthy appearance at an Oct. 18 NFL football game prompts naysayers to build conspiracy theories against Lesnar.

The UFC reschedules the fight for UFC 108 on Jan. 2, 2010 and bout agreements are sent to both fighters.

Lesnar is believed to be sick from mononucleosis and symptoms persists, scrapping the fight for UFC 108 and dispelling any far-fetched allegations that Lesnar was avoiding a fight against Carwin.

"Guys my manager Jason Genet just told me that UFC 108 is not happening," Carwin wrote on his blog. "Brock has mono(nucleosis) and what the UFC has told me is that I have earned the title shot but I have to wait for the title holder."

According to WebMD, mononucleosis "is a common viral illness that can leave you feeling tired and weak for weeks or months. Mono goes away on its own, but lots of rest and good self-care can help you feel better."

November 15, 2009:
The scare begins when UFC president Dana White tells the press at UFC 105 that Lesnar is "not well and he's not going to be getting well anytime soon."

"I can't really talk about it right now, but he is in rough shape. He's in really bad shape," White said Saturday. "I'm actually probably going to fly to go see him, and we're going to probably have to do some stuff to take care of this guy. He is not well, and he's not getting any better."

White says it's not cancer and not AIDS. Wide speculation begins on what exactly Lesnar is suffering from.

White tells TMZ that Lesnar is suffering with something related to an intestinal disorder and will probably require "major surgery" and according to the UFC president, "there's a possibility Lesnar will never fight again."

White plans to have Lesnar transferred to the Mayo Clinic for further diagnosis and treatment.

Lesnar is diagnosed with diverticulitis. A self-described "carnivore," his condition was a result of a poor diet of eating too much protein and too little fiber.
November 17, 2010:

Carwin, a critic of Lesnar's behavior at UFC 100, comes to the defense of Lesnar.

"I am sure most of you know I am not the leader of the Lesnar Fan Club," Carwin posted Tuesday on the MixedMartialArts.com forums. "That being said, antics or not, he is OUR UFC HWT Champion. He beat a future Hall of Famer to keep that belt and he NEEDS our prayers and good thoughts right now."

The UFC confirms Frank Mir will fight Shane Carwin for the interim heavyweight belt at UFC 111 in Newark, N.J.

White says they will find out next week the fate of Lesnar.

Lesnar speaks publicly for the first time on a live appearance accompanied by White on ESPN's SportsCenter. The UFC champ calls his recovery a "miracle" and won't need life-changing surgery. He will be back in the summer to face the winner of Mir vs. Carwin.