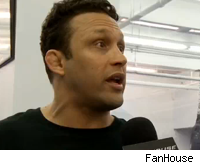 By the time Renzo Gracie steps into the Octagon against Matt Hughes at UFC 112 in April, he'll be 43-years-old. But the MMA legend says he feels more prepared than ever to make his UFC debut, which he all but confirmed will take place in Abu Dhabi.

MMA Fighting spoke to Gracie at his gym, the Renzo Gracie Academy in New York City, about why he decided to return to the sport after a three-year hiatus, his connection to the royal family in Abu Dhabi, whether he had anything to do with the recent Zuffa sale to Flash Entertainment and his thoughts on facing Hughes. Check out the full video interview below.