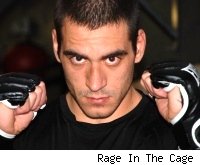 For the last two weeks, he's been just a name, two words uttered with a shrug of the shoulders. He's been a mystery, a man seemingly pulled from the ether to face off with a sports legend. A man, some say, brought in to lose.

But for the last two years, he has planned for and dreamed of this day, a chance to fight for a major promotion with a sizable crowd filling an arena, TV lights burning bright and his name on the minds of the MMA world.

On Jan. 30 in Sunrise, Fla., Greg Nagy -- the "other guy" in the Herschel Walker Strikeforce debut match -- gets the opportunity of a lifetime.

"I'm just a fighter looking to go in and make a name for himself," Nagy told MMA Fighting. "I'm training my butt off every day in preparation, and I'm looking forward to it. I understand the opportunity that's in front of me, and I'm going to do my best take to advantage of it."

Six-foot-three and 215 pounds, the Phoenix-based Nagy is a full two decades younger than Walker, and admits he only "vaguely" remembers his opponent's NFL glory days as a superstar running back. Still, he says, he is well aware of Walker's athletic reputation and admitted to being "a bit awestruck" when he was first offered the fight.

Previously unknown throughout much of the MMA world, Nagy's name first came up at the suggestion of his trainer Roland Sarria, who also runs the Rage In The Cage organization in which Nagy has previously fought (he has a 1-1 record). RITC has generated a host of fighters who've gone on to major promotions, and because of it, Sarria, himself a jiu-jitsu black belt who fought one pro MMA match, has good relationships with many major names in the sport.

"They're roughly the same size so I thought it was a good fit," said Sarria, who also runs the Rage in the Cage Training Center where Nagy trains. "You can't put [Walker] in with Fedor [Emelianenko], right? Greg is 1-1, he's a good-looking kid. I'd say he's a bit more advanced than Herschel, but not by much. I thought it was a good matchup."

Born in Hungary, Nagy emigrated to the United States in 1988, when he was four years old. Growing up in New Jersey, Nagy was always a sports fan, participating in hockey and playing high school football. A tight end and defensive end, Nagy characterizes his gridiron skills as "decent at best."

About two years ago, Nagy moved to Arizona, found the RITC training center, and fell in love with a new sport.

"What drew me into it is the competition," he said. "I don't think it gets any more pure. In other sports, it's you and your teammates fighting for something. In MMA, it's one man against another. And it's not always a question of how good you are, it's a question of how well you adapt to the ebbs and flows of the game."

Despite the fact that Walker is 47, most people expect him to win. Walker is clearly in incredible shape, his face still smooth and his body still powerfully built.

He still cranks out 2,500 sit-ups and 750 push-ups a day. He eats one meal, usually choosing soup and salad, along with some bread. He trains with the world-renowned American Kickboxing Academy in San Jose, Calif. -- a camp that has produced such MMA stars as Jon Fitch, Josh Koscheck, Mike Swick and Cain Velasquez, among others.

"Listen, in terms of athleticism, there's no comparison," said Sarria, who himself played college football. "Even at 47, Herschel's a tremendous athlete. But Greg's fearless. I don't know why, but our gym breeds these kinds of guys. They have no fear. At that age, they think they can walk through steel and bullets."

While Nagy is impressed with Walker's athletic pedigree, desire to fight and work ethic, he thinks that in the end, he's simply going to be better prepared for this specific athletic competition.

"More power to him for trying it," he said. "If he feels it's something he can do, I wish him... well, not the best, but I think it's cool he's trying a new athletic outlet. But the difference between us is that he's approaching it as a hobby. To me, it's my job."

Nagy had no hestitation in accepting the matchup, which does carry with it a certain amount of risk. If he wins, some people will simply say he beat an inexperienced 47-year-old. If he loses, he's a pro fighter who lost to a 47-year-old man.

"I don't think there's any shame in losing if you go forth and put in your best effort," he said. "It just means the other man is a better fighter on that night. He runs as big a risk as I do for losing."

Nagy has no contract with Strikeforce past this fight, so the bout could truly change the course of his career. The visibility can lead to bigger paydays and better opportunities. But much of it will be dependent on winning.

To do that, it seems likely that Nagy will try to put Walker on his back. Both he and Sarria note that Walker's martial arts experience prior to MMA was limited to taekwondo, so they surmise he will be most comfortable on his feet. Nagy feels confident that his ground game is superior to Walker's.

In addition, Sarria thinks the fact that this is Walker's first fight may play a role. Noting that he himself only fought once, Sarria said despite Walker's amazing resume -- which also includes an Olympic bobsledding run in 1992 -- he doesn't quite understand what he's getting himself into.

"He doesn't have any experience in MMA and that first time fighting affects everyone differently," said Sarria, who began his BJJ training with the legendary Rickson Gracie in the mid-1990s. "I did one cage fight in my life for a reason: it freaked me out. I felt caged. I can't explain it. Everyone reacts differently."

Walker may be more experienced in life -- he won the Heisman Trophy as the nation's outstanding college football player 10 months before Nagy was born -- but he's about to enter a whole new world. Even at 26, Nagy, a former mailroom clerk, thinks it's his world, one filled with opportunity.

"Ultimately the goal was the grand stage," he said. "Maybe I wasn't expecting this as soon as it happened, but I'm grateful for a chance. This whole thing seems almost surreal, but even as it's setting in, I'm going to keep focusing on my training, and I plan to take full advantage of the opportunity."