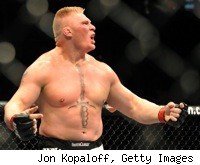 The fate of Brock Lesnar's fighting future will be officially announced on Wednesday's edition of ESPN SportsCenter. The UFC heavyweight champion is scheduled to appear at approximately 11 AM ET to talk about his recent health problems and a possible road back to the Octagon.

In a video interview with MMA Fighting last week, UFC president Dana White mentioned that the organization would hold a press conference sometime next week to discuss Lesnar's future, but the former NCAA and WWE champion's appearance on ESPN will now replace the press conference.

Lesnar hasn't competed since defending his heavyweight title against Frank Mir at UFC 100 in July.

"Brock Lesnar is definitely coming back to fight," Nelson told host Jon Anik. "And he's just kind of coming up slowly, training, trying to get his body ready and being smart with his recovery."

When asked whether Lesnar's prognosis was positive or negative, White only offered this:

White also said that he hoped to see him fight again soon.

Lesnar's health situation has turned into a daily saga in the world of MMA, with multiple reports coming out since he first pulled out of his UFC 106 title fight against Shane Carwin. It is believed that he suffered from an intestinal disorder, known as diverticulitis. Lesnar is expected to shed more light on his situation Wednesday.

The 32-year-old has yet to publicly talk about his condition or his future.