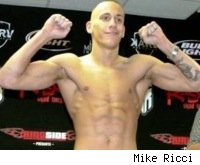 Bellator Fighting Championships continues to lock up solid up-and-coming talent for its second season, as the upstart organization announced Monday that it had signed Canadian Mike Ricci for its 155-pound tournament.

The 23-year-old is a training partner of UFC welterweight champion Georges St-Pierre at the TriStar Gym in Montreal, Quebec, Canada. Under the watchful eye of trainer Firas Zahabi, Ricci has gone a perfect 5-0 in his young MMA career.

"It's a long road to become the next GSP, but Ricci is the farthest along that road of anyone we've got," Zahabi said in a press release. "He's still earning his stripes, so to speak, but if he continues to progress, I think he'll be right up there with St-Pierre."

Ricci began training MMA at age 19, while also pursuing a college football career. He soon gave up football to focus on his fighting career. Since making his professional debut in June 2008, Ricci has stopped 4 of his 5 opponents in local Quebec shows.

"What's made me improve so much in a short period of time is helping guys like [Patrick] Cote and GSP in their training camps. It's also helped my confidence. When you set a goal of being a world champion, it may seem far-fetched-but not when you train alongside guys who've already achieved that," Ricci said.

"I really pride myself on my defense. I think I've only been hit like twice in my whole career. I think that really separates me from my competition."

The winner of Bellator's second lightweight tournament will face champion Eddie Alvarez. They are expected to announce more competitors in the coming weeks.

The organization, which aired its first season on ESPN Deportes, recently signed a broadcast deal to air its upcoming second and third seasons live on FOX Sports Net affiliates. Highlight programs will also air on NBC Universal and Telemundo.