Kongo vs. Buentello, Ludwig vs. Fisher Added to UFC on Versus 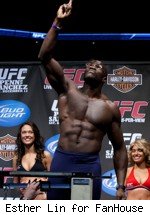 UFC on Versus 1 is already looking to be one of the best free cards the promotion has assembled in its four-and-a-half years of consistent live television programming.

To be headlined by Brandon Vera vs. Jon Jones and Junior Dos Santos vs. Gabriel Gonzaga on March 21 at the Odeum Colorado in Broomfield, Colo., the card was further upgraded Monday with the confirmation of two more bouts, Cheick Kongo vs. Paul Buentello and Duane Ludwig vs. Spencer Fisher.

Kongo (24-6-1) and Buentello (25-11), each coming off losses last month at UFC 107, will look to hop back on track on the televised card. Buentello lost his UFC return and a two-fight win streak off a majority decision to the lengthy Stefan Struve. Meanwhile, Kongo, who opened his UFC career winning seven of nine, wants to bounce back from losses to contenders Frank Mir and Cain Velasquez in his last two fights.

On the undercard, Ludwig (27-10) lost earlier this month on a short notice fight against Jim Miller and is being brought back for helping out as well as his Colorado roots. Fisher (24-5) tapped to elbows from Joe Stevenson at UFC 104 in October but prior to the loss, was on a roll with three wins against Jeremy Stephens, Shannon Gugerty and Caol Uno.