Josh Koscheck Says Paul Daley Is Next at UFC 113 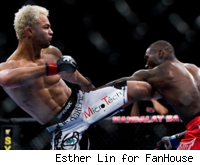 The long-rumored Josh Koscheck (14-4) vs. Paul Daley (23-8-2) welterweight clash is apparently close to becoming a reality, as Koscheck tweeted Monday that he will be fighting "Semtex" at UFC 113.

Koscheck was scheduled to face Paulo Thiago at UFC 109 next month, but was forced to pull out due to injury. Meanwhile, Daley is coming off a first-round knockout of Dustin Hazelett at UFC 108.

"I've said I want Koscheck," Daley told MMA Fighting last week. "I'm so serious about this -- I want Koscheck. Koscheck isn't asking for me; I'm waiting for him. He had an injury -- this is his first time back in the gym this week. I could have taken a different fight, but I'm waiting for him. I feel like I have something to prove not only to the UFC but to all the chumps on the Internet that talk sh*t and say, 'Daley's got no ground game; Daley's got no takedown defense.' Whatever. I want to see what their excuse is going to be after I knock Koscheck out."

MMA Fighting has learned that both fighters have verbally agreed to the bout, yet official agreements have not been signed.

Daley is 2-0 since making his Octagon debut in September, defeating Martin Kampmann at UFC 103 and Hazelett at UFC 108.

Koscheck was recently victorious at UFC 106 against Anthony Johnson. The American Kickboxing Academy product also picked up a win over Frank Trigg at UFC 103 since losing in shocking fashion to Thiago via first-round TKO.