Following Title Defense, Miesha Tate Hopes to Get Back in Strikeforce Mix 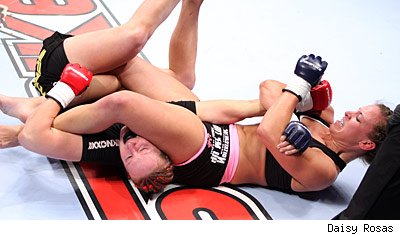 Miesha Tate (8-2) can't seem to get a Strikeforce fight, but she is doing a good enough job of staying busy by defeating opponents on smaller shows across the country.

Tate last competed for Strikeforce in May, losing to Sarah Kaufman via unanimous decision. She told MMA Fighting that she had hoped to compete on a recent Challengers show, but once that event never materialized, she was free to look elsewhere for a fight.

"Last I heard I was supposed to be on the January Challengers card that never happened, and I haven't heard about anything since," she said. "I'm still waiting for a fight with Strikeforce, but fortunately they are are allowing me to stay busy."

The organization has two Challengers events tentatively scheduled for Feb. 26 and March 26, and one would think Tate will be competing on one of those cards. Tate added that a March return to Strikeforce seems more likely, and if she had her pick, she would like to fight 4-0 Zoila Frausto.

"I think she's just a little too cocky," she said. "I think it would be a good fight."

Tate said she didn't appreciate some of the comments Frausto wrote on her MySpace page following her Strikeforce debut victory over Elisha Helsper in November.

CEO Scott Coker has often talked about building up their 135-pound women's division, but it seems as though most of the attention has been placed on the featherweight division. With exciting fighters like Tate, Sarah Kaufman, Kerry Vera, Takayo Hashi and Roxanne Modafferi in the mix, it's time to start focusing on the 135-pounders as well.

Below is an amateur video of Tate's submission victory from Saturday night.