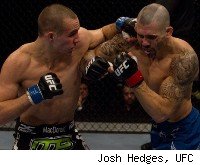 After making his pro MMA debut at just 16 years old, it seemed Rory MacDonald's arrival in a major MMA organization was just a matter of time. The Canadian welterweight, considered one of the top prospects across all weight classes, found his way to the big leagues at the age of 20.

Matched up against 10-year veteran Mike Guymon at the Jan. 11 UFC Fight Night event, MacDonald showed his own pedigree by shaking off a well-placed strike that momentarily stunned him and quickly turning the tables en route to a first-round arm bar submission victory.

The man who could be the UFC's next rising star recently took a few moments out of his day to answer a few questions about his quick journey to the big show.

Mike Chiappetta: Your nickname is "The Waterboy." Who gave you that name?
Rory MacDonald: Just everyone at the gym. It's from the Adam Sandler movie. When I was young, I'd have the tendency if I got hit hard or was losing, I'd put my afterburners on. I'd try to put in 200 percent effort to come out on top, and that was sort of how they got "The Waterboy" out of it. I guess I looked how he looked when he was spazzing. I guess I reminded everyone of that.

People have talked about the next generation of fighters for some time, and in some ways your represent that. Do you feel any pressure to represent that next generation?
Yeah I do. I just want to show I'm the best, I'm the future and I'm ready to show the world that I should be taken seriously.

Have you always been ultra-competitive?
I say I've always been competitive. No one likes losing. I've always liked sports, and I've always had a thing for winning and competing. It's that way for me in any kind of sport, but this sport most of all. It's my niche, and I take it very seriously and I'm very competitive with it.

Even though you're only 20, a lot of people heard about you as you were tearing up the regional scene. At what point did you feel like you were ready to jump to a major MMA organization?
I always talked about it. From my very first fight, it was my goal, I wanted to be in the UFC. When I was really ready, I'd say it was after the Clay French fight when I won the King of the Cage world title, that's when we made the push for it. I think that's when the realization came that I was at the level where I was ready.

What would you say your biggest strengths are, and what's the thing you need to work on the most?
My strength is my boxing, jiu-jitsu, and striking. My biggest weakness to work on is my wrestling. I think my strengths will get me through a lot of tough situations though, even against good wrestlers, just because of the way I fight.

You've gotten a chance to train with the champion at your division, Georges St. Pierre. What was that experience like?
It was a great learning experience. Just to see what level the best guy in the world is at, and the best guy in my weight class. Also, to be able to spend time with him outside the gym as well, to see the lifestyle. It was a cool experience to be around that.

Your UFC debut came against a 10-year veteran, Mike Guymon. You were in grade school when he was already fighting as a pro. What were your last thoughts before going out to the cage?
Before in the back I was nervous. I was putting a lot of pressure on myself to perform. Not that I'm scared of losing, but this was my first fight, so I wanted to perform at my best. I wanted to show people, not only do I belong here but I'm something special. I think that had a negative effect on me on the fight, just like my first [ever] fight. I'm glad it's done and over with. Now I can just fight like I regularly do. I'm glad to have my foot in the door, and I can just relax when I go in there next time.

There came a point early on when you were in some trouble after getting hit with a straight right, and got past that. How were you able to keep focused and recover to get the win so quickly thereafter?
I train real hard, and I'm used to getting hit hard. It's a fight, so you have to be expecting to get hit. You have to keep fighting through that stuff. It only really shook me up for five seconds, then I was seeing straight again. It wasn't that big of a deal. It happens, right? You can't get too worried about that kind of stuff during a fight.

What are your ultimate goals in MMA?
I just hope to continue winning, stay undefeated, and grow as a fighter. I don't want to tell you all of them, because I don't want to ramble on, and because a lot of people think they're a little ridiculous.