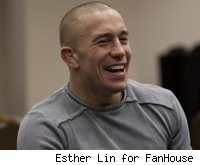 There are some who believe that Georges St-Pierre has nothing left to prove at 170 pounds, and that's why he should consider moving up to 185. However, GSP recently explained to the media that it's not that easy. He said that if should ever move up in a weight, he must be sure that his work is officially done at 170, because he won't be able to move back down. Plus, the current welterweight champion added that he has always been hesitant to move up because he has many friends who fight at 185, and he would never consider fighting any of them.

Watch below at St-Pierre talks about the pros and cons of leaving the welterweight division behind.