Five Burning Questions for Bellator in 2010 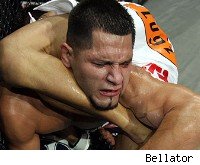 There's plenty to be excited about for this upcoming season of Bellator. The promotion has a deal in place for live programming and network television and it's attracting a number of names to watch.

In a roundtable below, Michael David Smith and I discuss five burning questions about the promotion's second season beginning in April.

Is Bellator's TV deal what Bellator needs to be able to compete with Strikeforce as the No. 2 promotion in the US?

Ray Hui: The television deal is an excellent improvement and it shows how promising the promotion can be that they solved, within a year, the biggest criticism received for season one. But, no, it is still a long way from the brand recognition and compelling roster that Strikeforce was able to develop at such a rapid pace last year. And despite the live TV component, the possible scenario of being preempted on Fox Sports Net does not reflect well on the importance of the series.

Michael David Smith: I don't think Bellator can compete with Strikeforce in 2010 -- Strikeforce is just as clear a No. 2 as the UFC is a No. 1, and I don't think Bellator's new TV deal is enough to close that gap. But the new TV deal does add a lot of excitement around Bellator for the simple reason that it's now on live. It was hard to get too excited for Bellator last year because by the time we could watch the fights, we had already seen the results online. That now changes, and I think the TV deal with Fox Sports Net makes Bellator Season 2 relevant in a way that Season 1 was not.

Can Bellator be successful without a polarizing figure on the roster?

Smith: I'm glad Bellator doesn't have anyone polarizing. To me, the cheap marketing gimmick is to get someone like a Junie Browning whom fans love to hate. What I like about Bellator is that their reliance on the tournament format means they're letting the competition determine their top fighters. I like the tournament format and I think Bellator should keep it up.

Hui: I like the tournament format as well, but I do think they need someone polarizing or at someone with marketability in order for them to be successful. Unfortunately, I don't think they can be successful on top prospects and exciting fights alone. They are a dream promotion for diehards but it'll be difficult drawing the casual viewer. I'm not saying they need to lure Butterbean out of retirement, but they need someone who can sell fights. I mean, can the average fight fan name at least two of the current Bellator titleholders?

What current free agents do you want to see on the Bellator roster?

Hui: Huerta and Hansen would be tremendous for Bellator. Huerta-Alvarez would make for an exciting fight and Hansen-Alvarez has already been proven to be a winning combination. Since Bellator has already compiled a nice roster of prospects, sticking with the theme, I'd like to see other prospects that were thrown to the wolves early in the UFC and flunked out: UFC vets like Jake Rosholt and Tamdan McCrory who still have plenty of room for growth.
Editor's Note: Hansen is currently under contract with DREAM.
Which recent signing do you think will make biggest impact and are you excited about?

Smith: Ben Askren has to be the signing who has the greatest potential to make a real impact, simply because his athletic credentials as an NCAA wrestler are so impressive. I don't know how good an MMA fighter he's going to be, but the athletic talent is obviously there.

Hui: A judo black belt at 16 and already with 23 fights under his belt, Jim Wallhead has the experience to contend right away in the welterweight tournament.

Smith: Dan Hornbuckle is the Bellator signing I'm most excited about seeing. He did big things in Sengoku last year, and I really like his chances of winning the welterweight tournament. I'm also intrigued by featherweight William Romero, who has a 5-0 record.

Hui: Agreed on Hornbuckle. Sengoku was his coming out party and he's going to be a fan favorite in Bellator.

Which one is the most questionable?

Smith: The biggest question mark to me is Jacob McClintock -- not because I don't think he has potential, but just because I want to see him against some higher-quality competition. His 6-0 record includes wins over fighters with records of 0-1, 0-2 and 13-15. He's going to see a - step up in competition when Bellator Season 2 starts.

Hui: Ben Askren. While a master in wrestling, he's still a work-in-progress in MMA. Once he gets the fight to the ground, the fight is his, but he's still learning when it comes to striking. The good thing is, he's young and has a great attitude though, so he'll do well, but an immediate impact -- I'm not sure.