Javier Mendez on Training Herschel Walker, Teammates Fighting Each Other 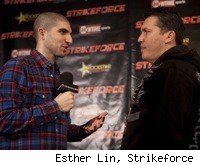 Javier Mendez, the head trainer and owner of the famed American Kickboxing Academy in San Jose, Calif., has worked with some the best MMA fighters in the world. That's why Herschel Walker temporarily moved to the Bay Area to train with Mendez and his team at AKA in preparation for his Strikeforce debut against Greg Nagy on Jan. 30.

MMA Fighting recently spoke to Mendez about Walker's development as an MMA fighter and what his strengths are inside the cage. He also commented on whether he would be in favor of one his fighters competing against each other in the near future. Check out the video interview below.