Trainer: 'Brock Lesnar Is Definitely Coming Back to Fight' 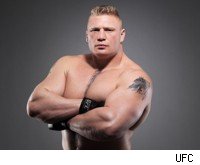 "Brock Lesnar is definitely coming back to fight," Nelson told host Jon Anik. "And he's just kind of coming up slowly, training, trying to get his body ready and being smart with his recovery."

Lesnar has been sidelined by what was first believed to be mono, but later revealed to be an intestinal disorder, diverticulitis.

Nelson is the leader of the Minnesota Martial Arts Academy in St. Paul, where Lesnar joined in 2007 when he began his pursuit in MMA. As one of the few with access to the very private heavyweight, Nelson has been communicating with Lesnar through emails, texts and occasional phone calls.

"He's been going into the doctor and making sure everything is going well for him and he'll continue to go in for a couple more tests to make sure he is 100% ready to train when he starts up," Nelson said. "He still has a few more things to go through."

UFC president Dana White told MMAFighting.com's Ariel Helwani on Tuesday that a press conference will be held next week in Las Vegas for Lesnar to speak publicly for the first time about his illness. While Nelson said he fully expects Lesnar to return, he does not know the details of the conference.

"That's the surprise for everybody," Nelson said. "I'm not sure of the expectations at this point right now."

White has described Lesnar's illness as potentially career-ending, but Nelson believes that's not the case and Lesnar is the type of individual with the strength to pull through the health issues.

"i know that he'll be able to come back but we're not going to push the river at all," Nelson said. "We want him to be 100% when he starts to train, but being the tough guy and athlete the majority of his life, he's been able to deal with adversity like this, so I'm sure once he gets going. He'll be at the top of his game real quick."