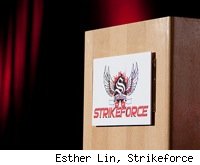 MMA Fighting recently reported that the organization is planning on following up their upcoming Strikeforce: Miami show with a Feb. 26 Challengers event in San Jose, Calif. Well, in addition to that event, MMA Fighting has also learned that the organization is in the process of finalizing a March 26 Challengers event at the Save Mart Center in Fresno, Calif.

The organization has yet to officially announce the new dates, but CEO Scott Coker told MMA Fighting Wednesday that there would be Challengers shows in both February and March.

Expected to compete on those upcoming Challengers cards are Luke Rockhold, Daniel Cormer, Sarah Kaufman and Meisha Tate, among others. The Save Mart Center held the fourth installment of Strikeforce Challengers in November.

Strikeforce has already announced that they would put on another CBS show, featuring Fedor Emelianenko and Dan Henderson in separate bouts, in April, but no official date or location has been announced.