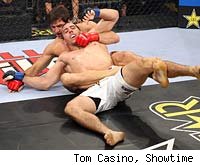 With a major event just two over weeks away in Sunrise, Fla., Strikeforce has tentatively set a date for its follow-up, as a Feb. 26 event is in the works, MMA Fighting has learned.

The show, scheduled to be the next event in the organization's Challengers Series featuring up-and-coming fighters, is likely to take place in San Jose, Calif., and have a main event featuring rising middleweight Luke Rockhold (6-1).

The American Kickboxing Academy product won all three of his fights in 2009, defeating Jesse Taylor, Cory Devela and Buck Meredith, all by rear naked choke. His only loss came in 2007, and he's won five in a row since then.

A Showtime representative could not yet confirm the show but said it was likely.

The next Strikeforce/Showtime collaboration comes on Jan. 30, when former NFL All-Pro running back Herschel Walker makes his MMA debut against Greg Nagy.

In the main event of that show, Nick Diaz and Marius Zaromskis will square off for the welterweight title. Meanwhile, Cris "Cyborg" Santos will defend her women's featherweight belt against Marloes Coenen. Robbie Lawler and Melvin Manhoef will also face off, and Bobby Lashley will make his Strikeforce debut against a yet-unnnamed opponent.