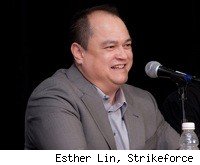 Scott Coker was in New York City Wednesday to promote Herschel Walker's mixed martial arts debut against Greg Nagy on Jan. 30, and MMA Fighting spoke to the Strikeforce CEO about why he was initially reluctant to sign Walker and what he expects to see from him in the cage later this month.

Coker also talked about the possibility of seeing of DREAM lightweight champion Shinya Aoki in Strikeforce, why Jay Hieron is fighting on the non-televised portion of the upcoming Strikeforce: Miami card, and the organization's busy 2010. Check out the video interview below.