Alan Belcher on His 'Good Contract' 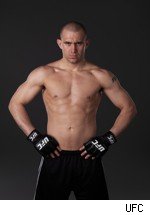 Mixed martial arts has reached the point where the elite, main-event fighters are making good money, but there's still a widespread perception among MMA fans that the mid-card fighters are getting a pretty raw deal.

But one mid-card fighter, Alan Belcher, just signed a new four-fight contract with the UFC, and he thinks he's making out very nicely.