Patrick Cote to Return at UFC 113 in Montreal 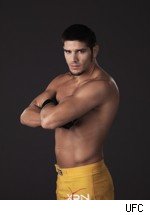 Patrick Cote will make his return from knee injury at a fitting event, UFC's third annual visit to Montreal at UFC 113 on May 1, the Canadian middleweight announced Wednesday.

It will be Cote's first taste of competition in 19 months due to an injury from his last fight, a title challenge against Anderson Silva at UFC 90 that ended when Cote injured his right leg on a kick. Cote was the first fighter to push Silva to the third round in the UFC.

Cote underwent ACL surgery the month and this past November his return was delayed again when he opted for MCL surgery on the same knee.

According to Top MMA News, Cote (13-5)'s return opponent will be Alan Belcher, whom Cote was reportedly paired against for UFC's first trip to Montreal at UFC 83 in 2008, but withdrew due to a sprained knee.

Belcher announced Tuesday that he inked a new four-fight contract with the UFC and that he has signed the bout agreement for his next fight, but wouldn't reveal the opponent.

The main event for UFC 113 is expected to be a light heavyweight title rematch between Lyoto Machida and Mauricio "Shogun" Rua.