Gabriel Gonzaga vs. Junior Dos Santos to Co-Headline First UFC on Versus 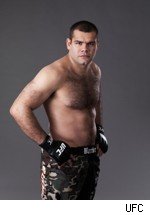 A showdown between Brazilian heavyweights Gabriel Gonzaga and Junior Dos Santos, victims of the injury-plagued UFC 108 card, has been rescheduled for UFC on Versus on March 21 in Broomfield, Colo.

The UFC announced Wednesday that the fight will co-headline in support of light heavyweights Jon Jones and Brandon Vera for the first of two UFC on Versus events in 2010.

Gonzaga (11-4), who pulled out of the UFC 108 card due to a staph infection, was victorious in his last outing, stopping Chris Tuchscherer midway through the first round at UFC 102 last August. Gonzaga once challenged for the UFC belt against Randy Couture at UFC 74 in August 2007. His hopes for a second shot at the title was derailed in March 2009 when he suffered a TKO loss to Carwin, but a win here against Dos Santos would be a ticket back to contention.

Dos Santos (10-1) has been on a tear in the UFC, stopping all four of opponents since his Octagon debut at UFC 90 in October 2008. He holds UFC wins against Fabricio Werdum, Stefan Struve, Mirko Cro Cop and earlier this month, finished Gilbert Yvel.