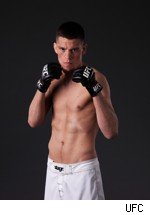 Nate Diaz is planning to move up to join his brother Nick at welterweight after losing to Gray Maynard in a split decision Monday at UFC Fight Night 20 in Fairfax, Va.

"I really don't think I'm going to stay at 155 pounds," Diaz stated on his camp's website. "I don't make enough money to have to drop this much weight so I'd like to fight at 170 and only go to 55's every once in awhile."

While moving up in weight is not the typical, or advisable, method for a fighter to makeover their fight career; it appears to be a better than nothing option. Diaz has lost three of his last four fights. Though, all losses were against elite level fighters the likes of Maynard, Joe Stevenson and Clay Guida.

Diaz explained his difficulty in striking with Maynard because he was wary of Maynard's wrestling pedigree, which allowed the Xtreme Couture fighter to dictate where the fight went.

"I fought like garbage and I'm sorry to my fans for my performance.," Diaz said. "I was hesitant about throwing hard punches because I kept thinking he was going to go for a takedown."

His fight against Maynard was close and all three of Diaz's UFC losses have now gone to the judges. The official scores read 29-28 Diaz, 30-27 Maynard and 29-28 Maynard.

"You know if you look at his face compared to mine right now you'd think there was no way he beat me in a fight but I've never been too popular with the judges," Diaz commented.