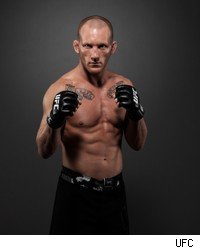 Perhaps it didn't materialize as the shining night that the UFC hoped for when they booked the Patriot Center in Fairfax, Va., but there were lessons to be learned from the action that transpired there on Monday night.

Let's take a look at some of the key storylines to come out of the UFC's UFN 20.

1) Beware the Kid
At just 20 years old, Rory MacDonald is the youngest fighter in the UFC, and one of the youngest in its history. Even before his UFC debut, MacDonald had a big reputation among those who pay attention to regional promotions.

Fighting in a UFC octagon for the first time, MacDonald got a good test in Mike Guymon, a 10-year MMA veteran who had only two previous losses on his record. MacDonald passed the test, rebounding from brief trouble to tap out Guymon with a first-round arm bar.

MacDonald is now 10-0 and is someone to keep on your radar as a rising prospect with a big future in the welterweight division.

2) If you don't have anything nice to say...
Look, we get it. You paid your money, you demand to voice your opinion at the arena. It's all good. But these constant boos over the last couple events are a bit perplexing.

At the WEC event last Sunday, fans booed the main event between Ben Henderson and Jamie Varner, seemingly just because neither of the two men happened to be Urijah Faber. Even after Henderson won by guillotine, they booed. Then on Monday night, fans seemed to boo every quiet moment, including the main event between Gray Maynard and Nate Diaz, and some moments of an otherwise action-packed fight featuring Tom Lawlor and Aaron Simpson.

Not every fight is going to be a barn-burner, but neither is it fair to heckle guys who are legitimately engaging in combat. Learn to appreciate the nuances of the sport, otherwise we come off like the bloodthirsty barbarians that the sport's critics portray us to be.

3) Evan Dunham Impresses
The UFC put Evan Dunham in the co-main event for a reason. He was a promising fighter on the way up, but didn't have a whole lot of hype around him. Fighting against the more well-known Efrain Escudero, Dunham got the opportunity to flash his skills and make some new fans.

Escudero came in as the favorite, but Dunham became the only underdog to win on the night. More impressive was how he did it. He struggled in the first round as Escudero repeatedly ducked his straight left and outworked him in the standup. But Dunham figured things out as the fight went on, making adjustments and building momentum until he submitted the previously unbeaten Escudero with an arm bar. As a result, he sets himself up for bigger fights -- and next time, people will know who he is.

4) Aaron Simpson Wins Iron Chin Award
Simpson was in big trouble early in the first round with Tom Lawlor teeing off on him, finding his chin repeatedly. Simpson was staggering, stumbling, and doing all he could just to stay upright.

Ten minutes later, he was victorious. So how'd he do it? Well, Lawlor helped by not rushing in for the kill, but he might have been purposely careful for fear of being taken down by Simpson, an excellent wrestler. Lawlor's hesitance may have cost him. But moreso, you have to credit Simpson for working through what had to be a horrific round for him and finding a way to successfully incorporate his wrestling and grind out a win in a fight in which he easily could have blown out.

5) Did Frankie Edgar Win Without Even Fighting?
BJ Penn has already told fans that he and the UFC have agreed that he'll defend his lightweight championship on the UFC 112 card in April.

While at the time, we didn't know who exactly Penn would be fighting, it became clear that with a dominant victory at Fight Night, Gray Maynard could make a strong case for the slot. He didn't make quite the statement that might have been necessary. Maynard needed all three rounds and could only manage a split-decision victory over Nate Diaz, who entered the bout losing two of his last three.

Maynard beat Edgar head's up in April 2008 via decision, but one of the issues plaguing Maynard has been his inability to finish; despite being 9-0 with one no contest, he's won six straight fights by decision. Also a potential issue for Maynard: he'd need to turn around quickly; he'd have to be ready for Penn three months from now. Edgar, meanwhile, is a bit fresher, having fought in Dec. 2009.

Maynard has a legitimate argument as the top contender by virtue of his win against him, but the UFC may still opt for Edgar.