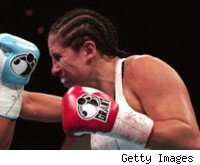 Kaitlin Young, Shayna Baszler, Jan Finney and Jennifer Tate are among the EliteXC and Strikeforce veterans slated to compete in an eight-woman tournament beginning Jan. 30 at Freestyle Cage Fighting 39 in Shawnee, Okla.

Additionally, the event is expected to be headlined by current Strikeforce title contender Erin Toughill. MMAFighting.com has learned that Toughill's opponent in the works is Romy Ruyssen, and the promotion is campaigning for the event to air on HDNet.

In one of four 135-pound bouts, Baszler, who served as current Strikeforce champ Cris Cyborg's first opponent in the US, will look to showcase her grappling skills against Smack Girl veteran Megumi Yabushita.

Young will fight fellow EliteXC veteran Jennifer Tate. Young is most known for fighting Gina Carano in the first female MMA fight to air live on network television. Her claim to fame is knocking out three opponents in one night to win the HOOKnSHOOT Women's Grand Prix in 2007. Tate, who holds a win over Tonya Evinger and was featured on a ShoXC card in 2007 against Baszler, last fought in November 2008, taking a split decision against Sarah Schneider.

Schneider is also on the card, facing Adrienna Jenkins, a prospect who has quietly compiled a 16-2 record in six years of fighting. Formerly of Miletich Martial Arts, she now trains at RoundKick Gym in Urbandale, Iowa.

A longtime competitor for the FCF, Liz Carreiro will face Finney, who was victorious in both her fights last year.

The four winners on Jan. 30 will meet in semifinal bouts on March 27 to determine finalists to crown a FCF Women's Grand Prix champion on June 12.