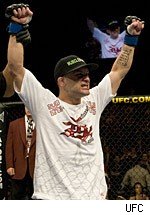 It's official: Frankie Edgar is the No. 1 UFC lightweight contender.

Dana White confirmed with MMA Fighting Tuesday that Edgar will receive the next 155-pound title shot against champion BJ Penn. There had been talk of Gray Maynard facing Penn next, but in a video interview shot Tuesday in New York City, White said he didn't think Maynard was 100% ready to fight for the title just yet.

The UFC president added that the tentative plan was for the title fight to happen in Abu Dhabi in April, but that the UFC 112 event in the Middle East is still not officially confirmed.

The organization announced on Tuesday that Flash Entertainment, a wholly owned subsidiary of the Abu Dhabi government, had purchased a 10% stake of Zuffa, the parent company of UFC and WEC.

Edgar is 11-1, and recently defeated Matt Veach last month. His only loss came against Maynard in April 2008. He holds wins over the likes of Sean Sherk, Tyson Griffin, Hermes Franca and Jim Miller.

Maynard defeated Nate Diaz on Monday via split decision. "The Bully" is 9-0 with 1 no contest.

White also said that he hoped Anderson Silva would fight Vitor Belfort for the middleweight title on the same card. Renzo Gracie vs. Matt Hughes is also expected to take place on the April card.