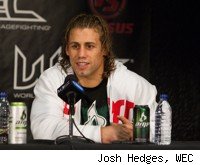 The "California Kid" went back home in search of gold, and now he'll get a chance to add some more precious metal to his collection.

Urijah Faber showed his starpower by electrifying a huge crowd in Sacramento and then flashed his firepower by defeating Raphael Assuncao via rear naked choke. As a result, he was granted the first title shot against new WEC featherweight champion Jose Aldo.

Faber was outworked by Assuncao in the first round, but found his stride in the second, and had completely taken over the fight by the third, dropping Aussuncao with a straight right. After Assuncao went down, Faber followed him to the ground and transitioned to the fight-ending submission.

Afterward, Aldo came into the cage, and the two respectfully set up the upcoming matchup.

"I'm ready to get that belt," Faber said. "We got a great champion right now. Jose Aldo. He's a phenom. He's both talented and creative but I'd love to go in there and get that belt."

The dynamic Aldo eschewed his native Portuguese to tell the crowd in English, "I respect Urijah, but no one will take my belt."

Faber (22-3), was returning after breaking bones in both of his hands in a June 2009 loss to Mike Brown, the second of two defeats at Brown's hands. Arguably the most popular fighter in WEC history, Faber held the featherweight belt from Jan. 2007 to Nov. 2008.

Aldo (16-1) won the belt in his last outing with a TKO victory over Brown last Nov. Aldo, who's won nine straight fights, has become one of the elite finishers in the sport, defeating six straight opponents via technical knockout.