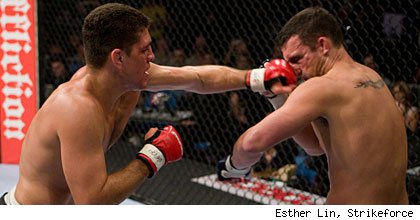 The UFC is back on Monday night with UFC Fight Night 20, featuring a Gray Maynard vs. Nate Diaz main event that could (if Maynard wins decisively) give us the next contender to the UFC lightweight title. We've got the full preview and predictions below.

How: Watch on Spike TV or just follow along with our live coverage here at FanHouse.

Predictions on the four televised fights:
Gray Maynard vs. Nate Diaz
I've long believed that Maynard has the talent to be an elite lightweight mixed martial artist, and with each professional fight he gets closer to elite status. Maynard's official record is 8-0, but he lost to Diaz when they were both contestants on The Ultimate Fighter. If Maynard avenges that loss, he'll deserve the next shot at B.J. Penn's belt. I think Maynard will do it.
Pick: Maynard

Efrain Escudero vs. Evan Dunham
This is exactly the kind of matchmaking I love: A battle of undefeated prospects that represents the toughest test of both fighters' careers. I give a very slight edge to Escudero.
Pick: Escudero

Amir Sadollah vs. Brad Blackburn
Blackburn was a pedestrian fighter with a 12-9-1 record when the UFC signed him in 2008, but he's surprisingly gone 3-0 inside the Octagon while mostly flying under the radar. If he improves to 4-0 against Sadollah he'll start to get some notice, but I think he's an opponent Sadollah should handle.
Pick: Sadollah

Tom Lawlor vs. Aaron Simpson
Simpson was a great college wrestler who in less than three years as a pro fighter has built up a 6-0 record, winning all six fights by knockout or TKO. If he were 25 years old I'd call him one of the best prospects in the middleweight division, but he's 35 years old, so I'll just call him a fighter I'm going to enjoy watching for as long as he's around.
Pick: Simpson