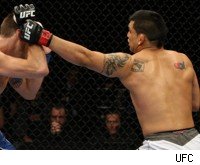 This is the UFC Fight Night 20 live blog for Efrain Escudero vs. Evan Dunham, the co-headliner for tonight's Spike TV card.

Escudero, the winner of season eight of The Ultimate Fighter, looks to extend his undefeated streak to 14 against another unbeaten lightweight, Dunham (9-0).

Dunham enters first to the sounds of Public Enemy. Dan Miragliotta is the referee.

Round 1: Escudero lands a leg kick. He kicks to the body and clinches with Dunham. Escudero exits on a right hook. Dunham missing the mark on his punch combos. Escudero moves around to Dunham's back and delivers knees to Dunham's right arm. He lets go of Dunham on a left punch. Escudero connects on a flying knee. Escudero is pounding away for the finish. Dunham is backing away in survival mode. Escudero continues to press forward and drops Dunham. Dunham looks for an armbar in guard. Escudero pulls out and drops a left. Escudero quickly grabs a guillotine with a minute left. Dunham turns into Escudero with a left underhook and gets to his feet. Escudero throws another flying knee that connects but he falls on his back. Dunham ends round with with a front headlock.
MMAFighting.com scores the round 10-9 for Escudero.

Round 2: Lots of quick punch exchanges. Dunham hits Escudero with a flying knee to the body that doesn't seem to bother Escudero. Escudero getting through with uppercuts. Dunham grabs a single-leg at 2:15 and eventually takes Escudero down. Dunham lands rights to the body in the Escudero's halfguard. Dunham hurting Escudero with punches and Escudero closes his guard. Dunham stands, and Escudero tries upkicks. Dunham times his win to take Escudero's back with an immediate body triangle. Dunham hits Escudero in the head with lefts. 30 seconds left in the round. Dunham flattens Escudero and rains down rights. MMAFighting.com scores the round 10-9 for Dunham.

Round 3: Dunham shoots and Escudero grabs a guillotine and rolls. Dunham escapes to his feet with a body lock. Dunham puts Escudero on his back, right into side control. Dunham takes full mount at 3:35. Escudero gives up his back and Dunham turns and slickly attempts the armbar. Escudero trying his best not to tap, but eventually gives in. Escudero is laying on his back, in pain.
Dunham wins by submission (armbar) - Round 3, 1:59