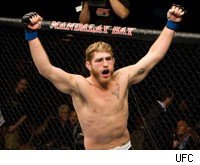 Simpson's come-from-behind victory over Lawler won the Fight of the Night bonus. Simpson was pummeled in the first round, but fought hard to escape with a split decision after three rounds.

For Submission of the Night, Dunham slapped on a slick armbar from Efrain Escudero's back for the third-round submission. Dunham said at the post-fight conference that he heard Escudero's arm popping. Escudero, who held on as long as he could, was unavailable during the official result announcement as he was taken straight to the hospital.

As the only (T)KO finish of the evening, Harris won by default, Knockout of the Night. Harris landed punches and elbows to a grounded John Salter for the finish in the third round.