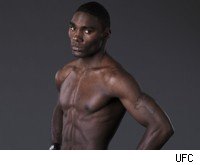 Two bouts have been added to UFC's debut card on the Versus network happening March 21 at the Odeum Arena in Bloomfield, Colo.

Anthony "Rumble" Johnson will face John Howard in a welterweight title, while Eliot Marshall will face Vladimir Matyushenko in a 205-pound showdown. The two fights join main event Brandon Vera vs. Jon Jones as the first three fights official for the card.

Johnson fell short against contender Josh Koscheck in the co-main event of UFC 106 last November, tapping to a rear-naked choke in the second round. He had won three in a row in the UFC prior to the loss.

Howard is a top prospect who has quietly compiled three straight wins in the UFC, and six straight overall. Last month, the Boston fighter knocked out Dennis Hallman.

Marshall, who fights out of Boulder, was on season seven of The Ultimate Fighter. He has won all three of his fights in the Octagon against Jules Bruchez, Vinny Magalhaes and Jason Brilz.

Matyushenko had been scheduled to fight earlier this month at UFC 108, but opponent Steve Cantwell withdrew due to undisclosed reasons. A former IFL champion, Matyushenko won his UFC debut last September at UFC 103 against Igor Pokrajac.