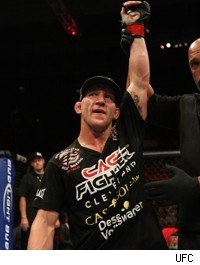 But Maynard didn't look particularly impressive doing it, leaving the fans booing at the end and likely not doing enough to earn the title shot that many MMA observers believe he deserves.

In the opening minute Diaz opened a cut over Maynard's right eye, but it didn't appear to affect Maynard through a first round that consisted of both fighters talking smack to each other and trying to taunt one another into making a mistake.

The second round started with more of the same, although Maynard began to land some hard right hands that were hurting Diaz, even if Diaz would always respond by shrugging his shoulders as if to say he was fine. Midway through the second Maynard rocked Diaz and knocked him flat on his back, but he appeared concerned about Diaz's superior Brazilian jiu jitsu and let him get right back up. By the end of the second round the fans were booing because both Maynard and Diaz were spending more time taunting each other than fighting each other, and in Maynard's corner after the round, Randy Couture admonished Maynard to knock it off.

"Don't play around with him," Couture told Maynard. "That's his game. That's not your game."

In the third both fighters began to get a sense of urgency, and Diaz landed his best strike of the fight in knocking Maynard down a minute and a half into the third. Diaz controlled the third round most of the way, but Maynard came on hard late, and at the end of the fight it was hard to guess how the judges would score it.

"I was positive I won rounds 1 and 2. Round 3 he connected a little bit more, but I dropped him pretty nice," Maynard said at the post-fight press conference.