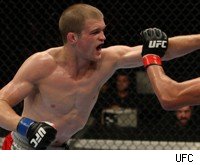 Efrain Escudero is undefeated no more. But Evan Dunham is still unbeaten after pulling off a surprising third-round submission victory over Escudero at UFC Fight Night 20 Monday night.

The action started in the first round when Escudero landed a huge knee to Dunham's chin, then chased him around the cage with several more punches before one finally knocked Dunham to the ground. But once they got to the ground, Dunham tied Escudero up, and once Dunham had weathered Escudero's storm, the rest of the round was more or less even.

"I'm sure I was pretty hurt," said Dunham at the post-fight press conference. "It's one of those things when you get cracked, you just don't quit."

And then in the third they went to the ground again, and that's where we saw what a talented ground fighter Dunham is. Dunham methodically worked his way toward an arm bar and finally got the stubborn Escudero to tap (after appearing to suffer an arm injury) with three minutes to go in the third round for a great submission victory.

"When I was cranking on it, I heard it go pop, pop, pop," said Dunham.

Dunham improved to 10-0, with six of those wins coming by submission, and showed why he's one of the best prospects in the UFC's lightweight division.