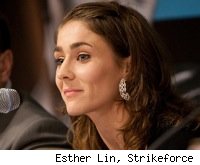 For all those who have been clamoring for more promotional videos from Strikeforce in anticipation of their Jan. 30 event on Showtime, you'll be happy to know that the organization recently released a Marloes Coenen (17-3) hype video, which should help fans get excited for her 145-pound title fight against Cris Cyborg (8-1).

Coenen made her Strikeforce debut in November, but her victory over Roxanne Modafferi was never televised due to time constraints. The entire fight was included in the video below:

The victory over Modafferi was important for Coenen because not only did she avenge a previous loss to Modafferi, it helped get her feet wet in the North American MMA scene.

And while Coenen still may not be as well known in the United States as, say, Gina Carano, Cyborg, or even someone like Shayna Baszler, she might be the biggest threat to knock Cyborg off her throne. In fact, in the above video, she proclaims that her game plan is to knock her out in the first round.

The 28-year-old Dutch fighter is a product of the famed Golden Glory camp in Holland, which has produced the likes of Alistair Overeem and Semmy Schilt. As a result, she's developed into a solid striker and one of the best female submission grapplers in the world.

Most importantly, though, she doesn't seem intimated by Cyborg, which seems to be half the battle when facing the Strikeforce champion.