Dana White: UFC Not Trying to Compete With WWE 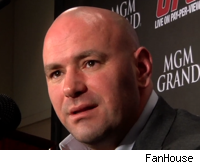 The UFC owes alot to WWE. After all, when the first season of The Ultimate Fighter aired right after Monday Night Raw on Spike in 2005, a lot of long-time wrestling fans, who are now loyal UFC supporters, were first exposed to MMA.

So even though UFC Fight Night 20 airs opposite Monday Night Raw, Dana White says the UFC isn't looking to compete with Vince McMahon for ratings. McMahon, on the other hand, clearly feels challenged, as he has brought in Mike Tyson to host Monday's episode of Raw.

White recently addressed the situation, and said that while he has the utmost respect for McMahon, he jokingly called him "an animal" when it comes to the ratings game. Check out the video below.