Amir Sadollah Beats Brad Blackburn for His Biggest Win Yet 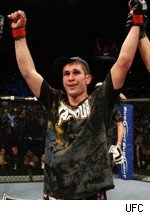 The first four minutes of the fight were a fairly evenly matched kickboxing battle, without a whole lot of damage done by either fighter. But in the final minute of the first round, Sadollah rocked Blackburn with a hard left-right combination, then took Blackburn to the ground and nearly finished him with punches before Blackburn managed to recover and make it out of the round.

The second round was closer, with five minutes of back-and-forth action on the feet that never saw either fighter in any real trouble. Sadollah did appear to stun Blackburn with one hard strike, but it was actually a pretty good round for Blackburn, considering how much trouble he was in late in the first.

In the opening seconds of the third round, Sadollah badly hurt Blackburn with a huge knee that sent him reeling into the fence, but when Sadollah took Blackburn to the ground after that, it gave Blackburn time to recover. Still, all Blackburn could really do for the rest of the fight was hold on, and Sadollah clearly won the round. The judges gave Sadollah the unanimous decision, 30-27 all around.

"I'm happy," Sadollah said afterward. "I'm so happy to win here in Virginia. ... I love this and I love the people I work with."

Sadollah is still one of the UFC's most inexperienced fighters, and the win over Blackburn improves his professional MMA record to just 3-1. But he showed with this fight that he's continuing to improve as a fighter, and although Blackburn is no star, the win was significant: Blackburn won his first three UFC fights and has wins on his record over solid fighters like Jay Hieron, Chris Wilson and Ryo Chonan. For Sadollah, in just his fourth pro fight, to beat Blackburn shows that he's taking his sport seriously and getting better each time he steps into the Octagon.