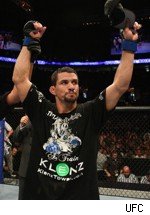 Tom Lawlor dominated Aaron Simpson for the first five minutes of their fight Monday night at UFC Fight Night 20. But Simpson came back and eked out a split decision win in a back-and-forth battle.

Lawlor landed several hard punches and stunned Simpson in the early going, and he appeared close to finishing the fight within the first couple of minutes of the first round. But as Simpson hung on for dear life, Lawlor appeared to tire, and that allowed Simpson to make it out of the first round, even though it was a round Lawlor clearly won.

In the second round, Simpson looked much more composed, and he managed to take Lawlor down with three minutes to go in the round. Although Simpson didn't do a lot once they were on the mat, and although Lawlor was able to get back to his feet, it was overall a much better round for Simpson.

Early in the third Simpson and Lawlor traded takedowns without hurting each other much on the ground, but as the round wore on it was Simpson who dominated as Lawlor looked exhausted. Simpson won the third round easily and looked at a couple of points like he was close to finishing Lawlor on the ground.

As an undefeated fighter with a great wrestling background, Simpson would be considered one of the best middleweight prospects in the world if he were in his 20s. But the 35-year-old Simpson spent several years as a wrestling coach before getting into MMA, and he's likely too old to ever be a title contender. Still, now at 7-0, Simpson is a very good middleweight who gave the fans a very good fight on Monday night.