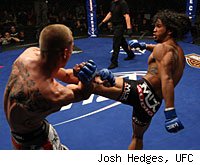 World Extreme Cagefighting is back on Sunday night in Sacramento, where hometown hero Urijah Faber will attempt to earn another featherweight title fight by beating Raphael Assuncao, and the WEC lightweight belts will be unified as Jamie Varner takes on Ben Henderson in the main event. We've got a full preview and predictions right here.

What: WEC 46: Varner vs. Henderson

How: Watch live on Versus

Predictions on the four televised fights:
Jamie Varner vs. Ben Henderson
Varner is the lightweight champ who's returning to the cage for the first time since he suffered multiple injuries while beating Donald Cerrone in a five-round war a year ago. Now that he's finally healthy, he'll defend his title against Henderson, who's also coming off a win against Cerrone. I like Varner to show off his ground game and submit Henderson. Pick: Varner

Urijah Faber vs. Raphael Assuncao
This will be the best fight of the night, with the winner almost certainly getting a shot at featherweight champion Jose Aldo next. Assuncao is a submission specialist with a 14-1 record, and I think people may be looking past him a bit -- he's a real threat to Faber. But I also think that Faber's dynamic striking will be too much for Assuncao. Pick: Faber

Mackens Semerzier vs. Deividas TauroseviÃ„Âius
Semerzier pulled off one of the biggest upsets of 2009 when he beat Wagnney Fabiano. Now Semerzier is a slight favorite to beat Taurosevicius, a Lithuanian who's very dangerous on the ground but doesn't do much on his feet. I'm picking Sermerzier to win, improve to 6-0 and start to make some noises about being close to a shot at the featherweight belt. Pick: Semerzier

Mike Brown vs. Anthony Morrison
If Morrison beats Brown, it would be as big an upset as Semerzier beating Fabiano. Morrison is athletic and explosive, but he's not in Brown's league, and I expect Brown to come back motivated from his loss to Aldo. Pick: Brown.