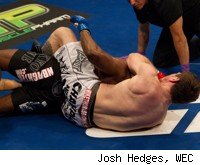 Mike Brown is back in the winning column after his first-round submission over Anthony Morrison at WEC 46 in Sacramento, Calif.

The former WEC featherweight champion submitted the WEC newcomer with a rear-naked choke at one minute and 54 seconds of the opening round.

Brown brought the fight to the floor from a bodylock and dropped punches on Morrison from side control. Morrison attempted to escape, but Brown maintained top position, taking full mount followed by back control to finish with the choke.

Brown dropped the featherweight strap two months ago to Jose Aldo in a TKO loss that snapped a 10-fight win streak.

"I just need a win," said Brown, who received a mix reaction from the pro-Urijah Faber crowd. "I just wanted to win so badly. I hate to lose any fight and it's very important that you don't drop two in a row. Now I'm back on track and I want to get a shot back at the title."

Brown added that he would like to face the winner of the next featherweight title bout, a title defense from Aldo most likely against the winner of Faber vs. Raphael Assuncao.