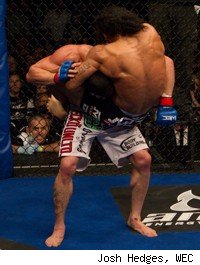 This is the WEC 46 live blog for Jamie Varner vs. Ben Henderson, the main event of tonight's Versus card.

Round 1: Varner took Henderson down with a big slam very quickly. Henderson looked to roll into a knee bar, but Varner defended well. Varner used a front headlock to land knees to the body. Varner tried a standing guillotine, then connected with a knee to the face. Varner outmuscling Henderson early against the cage as he smartly tries to wear down Henderson. Henderson lands a body kick that moves Varner backwards. Henderson chased him into the corner, but Varner outmaneuvered him to the cage. Henderson had the underhooks, then the body lock, but couldn't do much with it. MMA Fighting scores the round for Varner, 10-9.

Round 2: Henderson lands a knee to the face early, but Varner's unphased. Henderson's not as aggressive as he was against Cerrone, fighting a bit more defensively. Henderson with a body kick, then a combo coming forward. He lands another kick on the way in, and Varner catches his leg and dumps him down to the mat. He lets Henderson right back up though. Henderson shot in with 1:15 left, but Varner shrugged it off. Close round but MMA Fighting scores it for Varner, 10-9.

Round 3: Henderson's kicks seem to be his most effective weapon, and he's figured that out, tripling up with body kicks early. Varner tries to answer with a head kick. Henderson moves in for a clinch but is shrugged off. Henderson comes in with a knee to the body. As Varner ducks down, Henderson jumps into a guillotine, and Varner quickly taps.

With the win, Henderson becomes the undisputed WEC lightweight champion